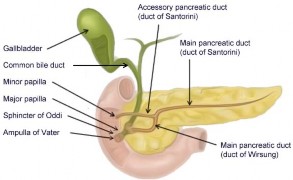 Laparoscopic removal of the gall bladder has many benefits, but one of its possible complications is injury to the bile ducts. In as much as 1 percent of these procedures, there is unintentional trauma to the bile ducts, which may cause bile to leak or the bile ducts to become narrow (bile duct stricture). There are other causes of bile duct stricture, such as cancer, but people who have persistent pain or discomfort 10-14 days after laparoscopic gall bladder surgery might have had a bile duct injury during the procedure. Some patients have fever or develop jaundice related to the injury, as well.

Bile duct repair involves surgery that can be relatively simple or complex; if infection has occurred, that must be treated, also. The earlier a bile duct injury is detected and repaired, the better. Over time, an untreated injured duct will not drain properly, leading to a build-up of bile in the liver.

This slow, progressive disease affects the bile ducts both inside and outside the liver. Inflammation and scarring cause the ducts to narrow, and bile accumulates in the liver. Many times, patients also have inflammatory bowel disease.

Patients with PSC have an increased risk of developing

cancer in the bile ducts. More common in men than in women, PSC carries symptoms of itching, jaundice, fatigue and bouts of fever. Sometimes blocked bile ducts can be opened through surgery or other procedures, improving the bile flow. When the ducts remain affected, liver failure may occur after several years. Liver transplantation is the only apparent cure.

Primary biliary cirrhosis (PBC) is caused by chronic inflammation of the bile ducts inside the liver, which progressively destroy the bile ducts. It is an autoimmune condition of unknown cause that leads to cirrhosis. PBC has a long and protracted course of progression. Some medicines are available for PBC in the early stages, but when cirrhosis has set in and symptoms of liver failure begin to show, liver transplantation is the best treatment option.

Cancer of the bile ducts, or cholangiocarcinoma, is slow- growing, but also not usually diagnosed until it is in an advanced stage. The malignant tumors block the bile ducts, which causes jaundice. The best possible treatment is to remove the tumor-containing bile ducts. If the tumor is situated in the bile ducts as they come out of the liver, removal of a portion of the liver along with the bile duct may be required to remove the tumor. Even if the tumors cannot be removed, there are endoscopic and surgical techniques that can unblock the obstructions. When surgery is not possible, radiation either alone or with chemotherapy is a course of treatment.

Cancer of the pancreas, the fourth leading cause of cancer death in America, is typically aggressive, hard to treat and metastasizes (spread) to other organs, including the liver. In relatively few cases, a complex surgery known as the

Whipple procedure is performed to remove the cancer. Most patients are not candidates for the surgery and receive a combination of chemotherapy and radiation. Unfortunately, the prognosis for patients at this stage of the disease is very poor.

Pancreatic cancer can be very painful, so while there might not be a cure in sight, there are procedures that can help to keep the patient comfortable. For example, the bile ducts of patients with pancreatic cancer can become blocked, leading to jaundice and related lack of appetite and itching. By stent placement, gastroenterologists can open the blocked bile ducts and relieve the symptoms of jaundice. To ease the pain of pancreatic cancer, a celiac nerve block can be used to inject certain agents, such as alcohol or a steroid, into the identified nerve or nerves. The numbness brings pain relief that narcotic medications cannot match.