Resection is the surgical removal of a tumor and surrounding tissue. A partial hepatectomy or liver resection is the removal of the tumor-containing portion of the liver, varying from a wedge (like a slice of pie) or an entire lobe. In time, the remaining liver regenerates. Resection can be performed alone or in combination with other treatments, such as radiofrequency ablation or microwave coagulation therapy, which uses high temperatures to destroy the tumor. The main obstacle to performing a resection for a liver cancer is the presence of cirrhosis, which limits the ability of the liver to regenerate. This limits the surgeon from treating many patients who could otherwise benefit from a liver resection because of the high likelihood of liver failure developing after the surgery. When resections are performed, patients are expected to be in the hospital for 5-10 days. 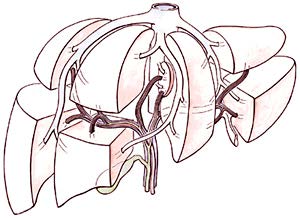 <
Sections of the liver and their blood supply.