The bile ducts can be prone to blockage by stones, narrowing, or tumors. Opening up blocked ducts and removal of the blockage restores the flow of bile and relieves pain and/or jaundice. 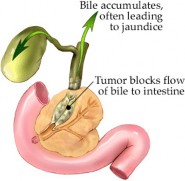 Usually, a bile duct that contains a malignant tumor is resected, or removed. Unlike simple removal of the gallbladder, which is most often done via a laparoscope (minimally invasive surgery), the removal or resection of a bile duct tumor (which can also include removing parts of the gall bladder, liver, pancreas or small intestine) is done through an “open approach” or a large incision. If the tumors cannot be removed completely, there are procedures that can unblock the obstructions, which provide considerable relief and prolongation of life span. When surgery is not possible, radiation either alone or with chemotherapy is a course of treatment.

When bile ducts – the tiny, quill like passageways through which bile drains – are irritated (from inflammation) or injured, they become narrow. This abnormal narrowness is called a stricture. Strictures can be caused by cancer or by unintentional injury to the ducts during certain laparoscopic procedures (particularly removal of the gall bladder). Bile duct repair involves surgery that can be relatively simple or complex; if infection has occurred, that must be treated, also. One method, the Roux-en-Y hepaticojejunostomy, restores bile flow by connecting bile ducts to the small intestine for adequate drainage. The earlier a bile duct injury is detected and repaired, the better. Over time, an untreated and blocked bile duct will lead to a build-up of bile in the liver and causes cirrhosis. 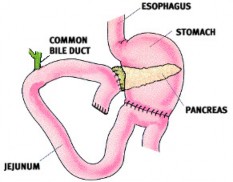 Very few patients with pancreatic cancer are candidates for surgery and instead receive radiation and chemotherapy, the latter particularly to relieve pain. For those who are, the procedure that is performed depends partly on the tumor’s location.

Pancreatic cancer can be very painful, so while there might not be a cure in sight for the patient, physicians, including those at University Hospital, do their best to keep patients comfortable. For example, the bile ducts of patients with pancreatic cancer can become blocked, leading to jaundice and related lack of appetite and itching. By stent placement, gastroenterologists can open the blocked bile ducts and relieve the symptoms of jaundice. To ease the pain of pancreatic cancer, a celiac nerve block can be used to inject certain agents, such as alcohol or a steroid, into the identified nerve or nerves. The numbness brings pain relief that medications cannot match.